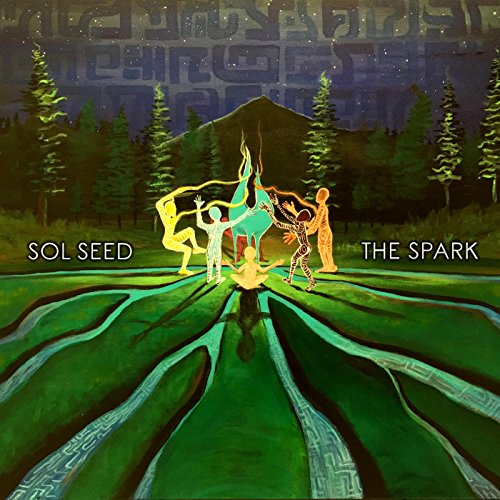 Who are the first artists you think of when I write England?

Who are the first artists you think of when I write America?

And when I write Australia?

The geography of music is an interesting subject. Just as interesting? I can name an artist for each of these locations: The Clash, Pearl Jam, Eskimo Joe, Daft Punk, Bob Marley and the Wailers.

Even more interesting? Each one can square me into those countries at the epoch of their existence.

The Clash let the fires of a London riot blaze through their guitarwork, Eskimo Joe’s piano pounds on my Australian heartstrings while Daft Punk brings me back to my nights clubbing around France.

But let’s up the stakes: guess what’s even more interesting? I have never found a band that squares me into my home of Oregon.

Not one, not even The Shins.

Not until I discovered Sol Seed and their album The Spark. With The Spark everything changes. Each time I feel like I have listened to a band who grew up in the same area as me. The same stomping grounds as I. Over 12 tracks, Sol Seed dials me into my Oregon roots and the many musical experiences of my life.

And they do this all as an alt-reggaetón accented with some of the best damn world music influence.

This must be what it felt like when young London punks first heard Joe Strummers guitar sting through their stereo. Only this time, it’s with a bloody didgeridoo buzzing and warbling in the wilds of Eugene.

Guasco’s atmospheric playing of the didgeridoo compliments Sol Seed’s shiny new production play, staying in the sublime rather than the overt. And it’s not just Guasco’s didgeridoo which moves into the atmosphere. Keyboards and synthesizers adds to cuts like “Tick Tock,” “Possible Obstacles” and “Boom Shot.”

But let’s not just become enamored just with the game in the periphery—there’s some talent in this group as the album packs the hand with good songwriting. Dealing in synchronicity, the band hits with a run of stellar tracks.

I don’t know which game plays with a hand of eight, but between an eight-song straight and the royal flush that is Michael Lennon’s voice, the cards all add up to a winning play for Sol Seed.

“But shit,” as Lennon sings, they can still lay it on, slapping rather than tapping the nose, while venturing into some early Beatle lyrical territory.

I don’t disagree with much of them—every time listen, I hear a band who grew up in the same world as me. The same stomping grounds as I. It’s just some of the bridges in “Tick Tock,” “One Step” and “Boom Shot,” have me wondering at times if the band really knows how to build cohesive lyrics together without laying it on.

At least it’s better than the almost cacophonic lyrics that they suffered from on Family Tree. At least on The Spark they sound like a band conversing with each other.

However, the pay out in the lyrics comes from the flipping between hip-hop and alt-rock delivery with the reggae tone. The entire band receives gold stars here.

Cuts “Warmth & Love” “Possible Obstacles,” “The Spark,” “One Step” and “Chant Down” give living testament to this theory as the singing and music is so good, it carries the album past any perceived mistakes. I mean honestly, the solo on “Chant Down” is probably my favourite thing.

But throw in the atmospheric didgeridoo, more space-age reggae guitarwork, acoustic accents, Sorenson’s solid fills and some percussion that would make Michael Carabello blush, I can only ask for more.

And that’s where my biggest wish comes from. The last cut of the album leaves me with what any good album should: wanting, asking, pleading for more.

With percussion that just can’t miss and a didgeridoo that just can’t quit, the curio of a cut that is “Roots” leaves me gobsmacked. Where Family Tree sprawled on and on—requiring a trim on most tracks—“Roots” and The Spark by-large needs a second part. I would love to hear Sol Seed’s next album pick up exactly where “Roots” left off.

Sol Seed a band that is consistently improving with each album and while The Spark is no diamond, it is exactly what the title says it is: a spark, ready to catch fire and flame on a brighter future for Sol Seed.

All I need now are some sunglasses because I am ready for the wildfire.

Quick impressions: I love this album, despite some lyrical passages that have me at a meh, I am wanting more. Sol Seed leveled up their album game to match their live performance.

The Breakdown: "Heart Skipped A Beat" by the xx