In the past year, I’ve caught an increasing amount of concerts—20, in fact. A decent count, but it neither gives me any right brag, nor any excuse not to have earplugs. The sum isn’t off the wall amazing, but it is a roughly 2000% increase of my concerts-per-annum rate naught but four years ago. In 2015, I went to only one live event, Oregon Country Fair. And in hindsight I should have bought earplugs then. Because now, I could swear there is a low incessant static killing me when the room mulls into a moribund muteness; when the space becomes more silent than a wake, it muscles in with a hand glued to a doorbell. Normalized and mostly ignored via a constant soundtrack, I know it’s there—the little bee in my bonnet—buzzing like a bastard by my ear and ringing true the phrase: a deafening silence. Oh, man, I never thought Goya and I would have something so painfully in common. Small wonder how he was driven mad. Not even cotton earmuffs could save him from a system hum vibrating from eardrum to bone marrow.

So in hindsight, I should have been smart and bought those earplugs.

Or at least, that’s what I thought after a solid week of non-stop spelunking through the caverns of Mogwai’s sound, carved with timbre and pure oscillation—rhythmic white heat that erodes man to tendon and bone. Most people meditate with some new age waterfall recording bullshit or the latest world music chantry CD as they strive to disconnect themselves from all that anger pent-up from the seventeenth time someone fucked up their coffee or the forty-ninth moment the keys were misplaced or the two-thousand-three-hundred-and-seventy-third-time a clerical error—in guttertongue: a cleric with no fucks left to give—misspells their name “En-ee-eye-ess-oh-enn.” Not Mogwai; they want you to meditate from every pore and every hair-follicle and every toe callous screaming to their music harder than a prepubescent 60’s chick screams to a half-second glance of John Lennon. Noise Rock, it’s not for the human ear, it’s for the Richter scale. And your body should be orgasming with fear.

So when I walked into The Celtic in Tarbes, I was ready to just chill to some good ol’ fashioned power punk. But I wasn’t quite sure I would get get it from these guys: a trio of Spaniards inspired by everything from Madrid-scene punk, Nirvana and the wardrobe of Alice Cooper all bottled in a parlor bar infested with punk vulgarities; incomplete personal libraries, crooked chaises, broken-spring canapés and a posterboard patchwork wet-dream plastered from wall-to-wall and crawling to the ceiling to find some échappatoire long from the screeching below. Some, folding over and faded-out: old advertisements for Machete, Grindhouse and Alladin Insane triangulate the bar in the world of artistic mockery and alternative ostentasia. Others, defaced and decrying in mangled franglais: “Jean-Louise is NotACrime,” “Not une performance incroyable,” “Not Michael Fassbender” and “Not merveilleux.” All litter a punched-out paradise filtering pop-punk through the dinky PA system and coat the walls as if sealing the pipes within the cracked skin of old wallpaper. The place sweats not because it’s hot, but because it is old and re-purposed for the umpteenth time. Is the problem from before the second remodel, after the fourth, or just now found to be cooked into its byzantine foundations. Who knows, and don’t hope for any simple answers. It’s a haven not for the hopeless, but for those who don’t need hope. Say what you want about shithole bars but in France this self-professed rickety Hisfrancophone hole-in-the-wall rocked the look with fucking style. Oxymoronic, or something—I’d know better if the Guinness wasn’t so awesomely cheap. 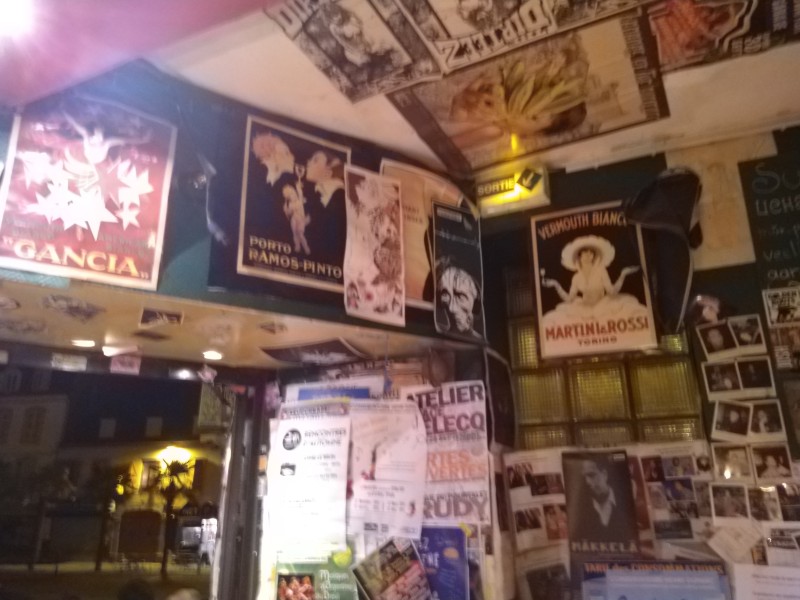 What a bar, what a night, what a pair of bands.

And there, sitting at a central table, a thought marveled the historian in me: that this table might once have been coated in the absinthe of sloppy philosophers, once regarded jazz serenades and beat poetry, once been the table in ancient games of cards and chess and was now ready to feel some punkish wrath. To do it, “The Birra’s Terror” looked the part: displaying in front MaDrako, in haphazard Alice Cooper facepaint, and Zurito McLitro, an absolute tank of a bassist player who in another life must be a living Juggernaut. And guarded in the back, LeyDi Beer, the punk prototype drummer; heavy on the toms and snare, heavier on the wrists. Nothing wimpy about it, if they could be Black Flag they would. But asked after their set, Madrid proved all the inspiration they needed: listing off El Síndrome de Cassandra, Regreso a la Ordália and Estamos Todos Acusados, surround on all sides by a saltpeter milieu of Basque, Catalan and Andalusian punk-rockers, sparked by everything from Dead Kennedies to Anti-Flag. Yes, Castille won the wars—but the autonomous communities have her culturally cornered. Across the Pyrénées this is unheard of; Paris, la ville belle, la ville des lumières, la seule sœur du Rome, didn’t realize her position as the premiere city of her country via sweet words and candied concessions. What would be a language in Spain is a filthy patois in France, a derogatory cousin of le français propre, le français academicien, le français-français, or whatever one might call this anal-obsessive control of how people should speak and paging Newspeak. French has her own subversives and renegade interlocutors, but, relegated by the rules of the academy the old legion of regional languages no longer inform her and transmute her in the same chemical capacity as that of Spanish, Basque, Catalan, Andalusian and Galician do. But, lacking in Hispanophone, these myriad influences are lost in the growls and rumbles that tumble from MaDrako’s lips, static emissions thrust from throat. All I can hear is the fury in the words, the anger in wanting a good time and then the blasted mad chant: “la puta es tua madre” to which the Celtic regulars reciprocated, the barkeeps reciprocated, friends reciprocated, I reciprocated, and if the poster-orgy could have talked, it would have reciprocated too.

There came a critical juncture of the barroom concert, when the night asks in plain: “enjoying yourself?”

And despite ears bleeding profusely, my answer was equally plain and just as the main event came on too. A no labels and no rules band with even less online presence then the Terror. The name was Patator, and the album was Sex, Drugs and Guacamole. This is the part where the studio audience should have laughed. But then, from the bowels of bric-a-brac stacked amplifiers came that blessed-by-demons white heat screech, the eruptive, ear-shattering buzz, hum and drone of noise rock parading at the pied of the Pyrénées with pyroclastic flow. For Patator, their one true break-through bound the sparse power of punk with the sheer volume and dread of metal in unholy matrimony. This wasn’t new, but there was no pedigree, there was no place in the noise rock kinship chart—the closest degrees of relativity to noise rock rested in Metallica, Pantera and all-unifying Nirvana, testimony to Cobain’s symbol status whether he rolls the entire fucking graveyard or not—they had come to the same conclusions from vastly different data points. And my tinnitus was paying for it. I shoulda bought those earplugs, man.

‘Cause drone doesn’t stop. When the concert ends, drone stays. And I don’t really plan these things, man, so for the sake of my future enjoyment of their music, I had listen from a distance after making to about halfway through the set. A painful conclusion, but one that paid off. While talking in broken Spanish with LeyDi Beer about the merits of Ludwig drumkits, Zurito about the evolution of Spanish punk, and MaDrako about the well-executed facepaint homage to Alice Cooper, my head craned and distracted itself from la conversación rota as Patator shook the very pavement beneath us. Had I leaned against the wall, my bones would have come to a quantum realignment. As it was, the lights glistened and the world hummed while we drank, talked and listened in a wonderful occasion of “Spanish 101 with Friends.” No point to pontificate on any possible lyrics flowing from the stage area, noise rock eschews them and Patator’s metallic tendencies right devoured them in the mix. Talking with Pierre (guitar), Djiboun (also guitar), Guiltz (bass) and Coucouche (drums), it’s just a damn shame they have next to no website access—not even a Bandcamp page—to help these guys out. A punk-metal fusion is something this earth needs more of, and I’m glad these Frenchmen are here to provide. In the successive questions, I confirmed how Djiboun and Pierre exchange the lead and rhythm duties cut-by-cut, how Guiltz works his five-string bass to bring that tone lower, deeper, darker; “ça te prendra le tripe,” he told me (translation: it’ll grip you by the gut). And it’s true, but not just for the intestines. Every piece of me shook and shattered with this band, engineered with Coucouche’s penchant for choice. Ever the Frenchman, he waxed shortly on this philosophy, “plus j’en ai, plus j’en ai pour exprimer” (the more I have, the more I have to express). An elegant thought in an elegant language, this is the ethic behind the slow, dreadful onset of Patator, who rolled like an avalanche after Birra’s Terror had rocked like a heatwave. Wiping out the heat until jaw cracks jaw in click-clack fashion. The latter’s fire had nothing on the former’s ice. And both walked out the joint to applause, great success, a night carried out flawlessly, a testament to a world replete with skilled individuals and a sign that this erstwhile absinthe bar was a place to frequent in Tarbes.

Whether stuck by accident or visited by choice, take this as a Rick Steves tip from someone who is blatantly not Rick Steves: you can’t go wrong with the Celtic—or a pair of earplugs.

A Brief Inquiry Into Online Relationships: So good, The 1975 are infuriating