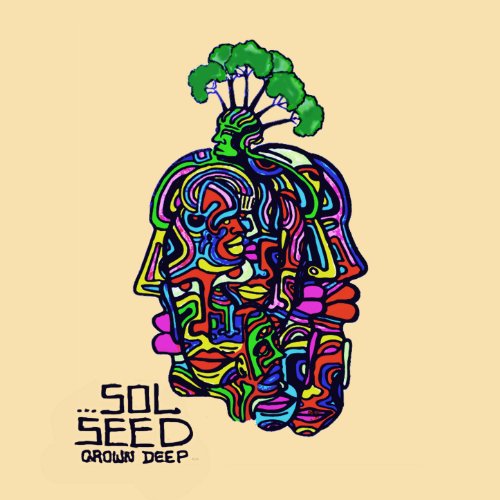 On any regular day, I probably wouldn’t have given Sol Seed much thought.

Thankfully, the weekend of Oregon Country Fair does not comprise of normal days.

Perhaps something mixed in the water (1).

Perhaps something mixed in me (2).

And I knew something tasted different within the first few notes.

My reggae knowledge goes this deep as Bob Marley and the Wailers’ greatest hits, “Red Wine,” and “Pressure Drop.”

Everything else is cursory—I learned of reggae when I discovered the Clash. And before listening to Bob Marley, I appreciated reggae more for its influence on artists I like, Elton John and Led Zeppelin among others, rather than the combination of social awareness and artistry.

But from first listening to Sol Seed’s Grown Deep, it was easy to see the name of the game in reggae involves the exposure of real life social situations in popular musical format. It’s like hip-hop with melody.

And just like a rapper wears his samples, Sol Seed makes a music lovers’ life easy precisely because they already have their influences worn on their musical sleeves:

The base, of course, tastes of the reggae. The flavour, however, pulls from the many spice jars in and around their kitchen. And it’s this feature of pulling together seemingly random elements that makes Grown Deep a solid debut.

It’s not perfect—it doesn’t immediately grab the listener and neither does it have to: it just needs to showcase the specialties of each dish.

Bringing the brass on “Mr. Mistah” and “Believe (The Truth), Kenny Lewis’ Latin guitarwork on “Solo Humano” and “I Sight” and then Sky Guasco’s rapping on “Unusual Love,” this album picks the style it wants to go with and works it all into a reggae base.

Oh, I misspoke when I said world, by the way. I meant to say: Sky Guasco brought the bloody didgeridoo.

Moreover, he brings serious talent with the didgeridoo and the following is true in both music and cooking:

When advice tells you to break the norm, they don’t expect the norm to be broken by the buzz and hum of a didgeridoo. Okay, maybe that doesn’t apply to cooking.

But there’s an element of the new cook in this album. My ear, as a taste bud, picks up on some songs and falls off with others. Pezzano’s bass guitar is solid, but Sol Seed sounds a little ad hoc in the big kitchen.

Songs like “Ruler of Your Own Time,” “Everyday Thing,” “Hot Knife” and “High Tide” sound unfocused in their space. This can be great live, but it’s lost in translation on the album. The vocal performances throughout Grown Deep intimate reggae and hip-hop influences but never showcase them.

And sometimes the lyrics can lay it on a little thick (“Unusual Love,” I am looking squarely at you).

I can see, hear and taste all that’s different. But that doesn’t reveal anything special about the album. Grown Deep works as an album just trying to get the word out by feeding listeners with a ready-made repertoire of Staples requiring multiple sittings before it begins to grow on them.

Sol Seed doesn’t even reveal their truly special ingredient until “High Tide.” And that hurts the album.

It reminds me of why it took Prince three albums to prove why he was the real cook in the eighties kitchen (sorry, MJ).

Thus, Sol Seed may know what they want to do, they just need to do it next time. Otherwise the dish will remain solid, but never grow to be special.

Quick impressions: A solid but never special debut, Sol Seed sets the base but needs more time to find the spice. Look to later and live recordings to find what makes this band special.